If you have piles of dirt around your lawn and flower beds causing havoc, you may have moles, voles, or gophers on your hands. Knowing the difference between these small animals can help you develop a game plan to completely remove them and keep your lawn and garden looking bright and lush.

How Can You Tell the Difference Between Moles, Voles, and Gophers?

When identifying your garden pests, keep in mind that you can have all three animals (voles, moles, and gophers) running around your yard and underground. However, you can identify your turf pest by looking at its appearance, behavior, and yard damage.

What do moles, voles, and gophers look like? While these small and furry creatures may look similar, upon closer inspection, their differences in size, color, and overall look are easy to spot. 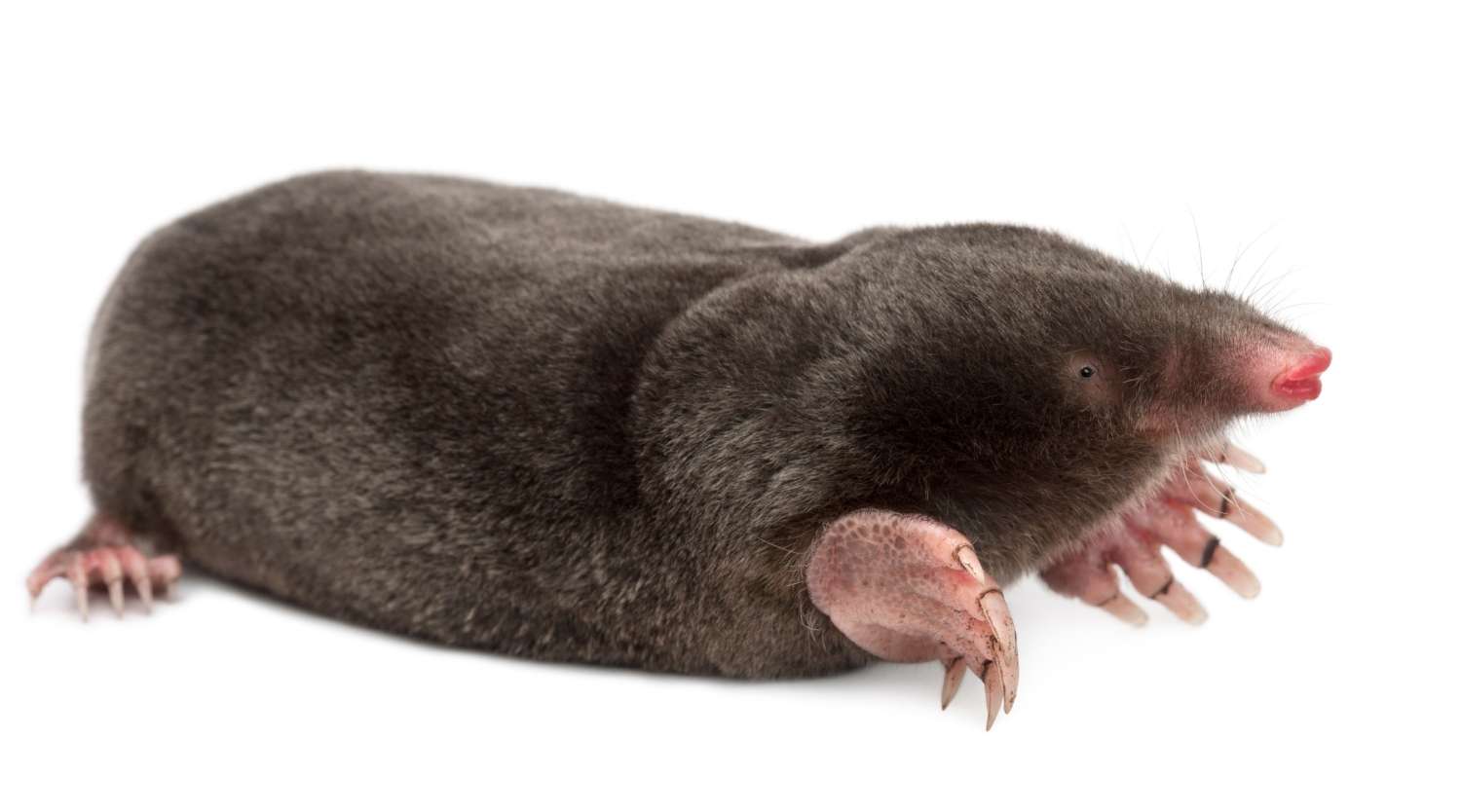 Moles are the most distinct looking of the bunch. Smaller than gophers, moles are about 4 to 8 inches long. They have long and narrow heads and (generally) flat snouts. Their ears and eyes are nearly invisible, all the best to keep them protected while they are underground.

Moles can be identified by their large, white, clawed feet which allows them to dig through different terrain. Their silky dark brown or gray fur enables them to seamlessly move forward and backward through their self-made tunnels. 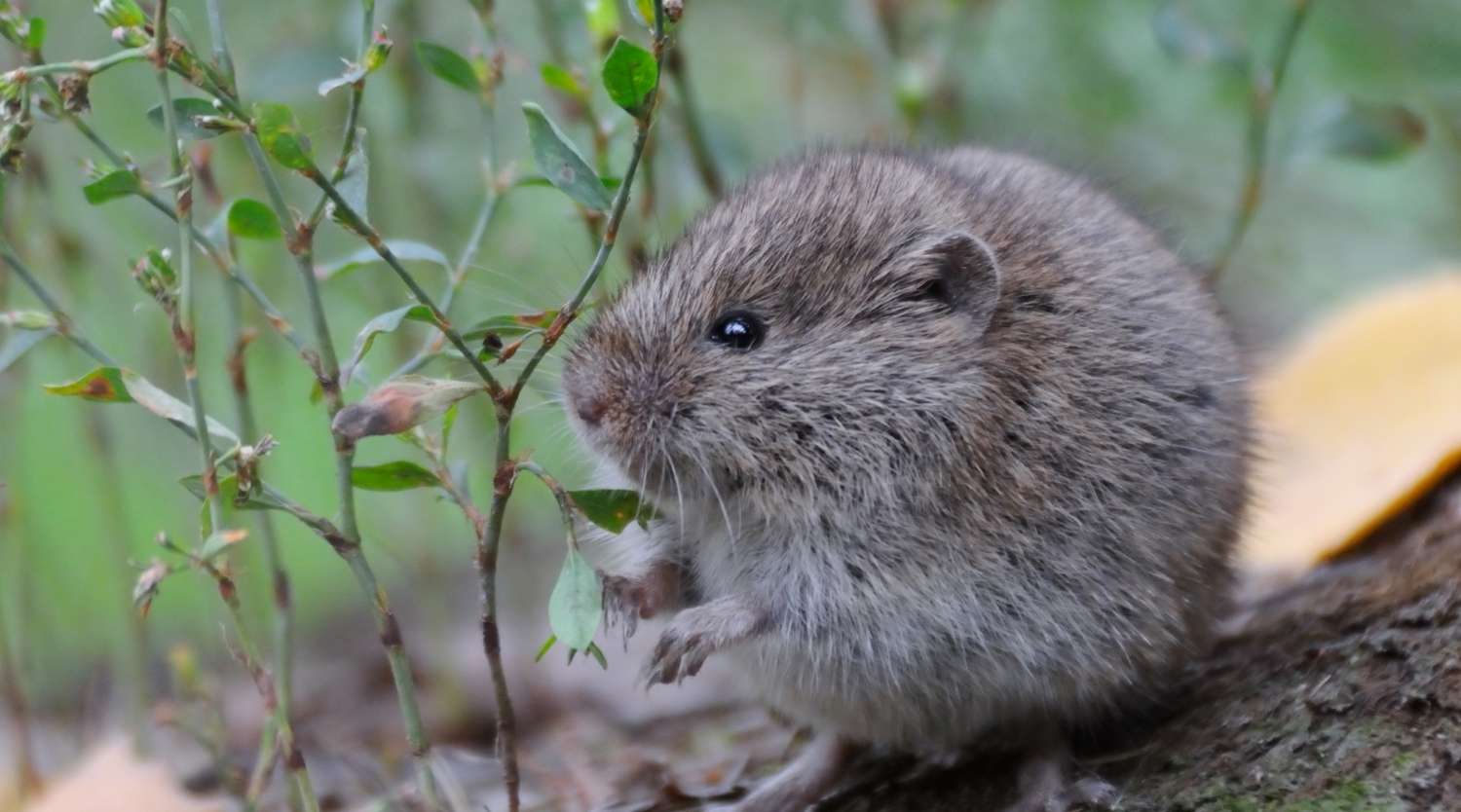 Voles, also known as field mice, are the smallest of these common turf pests, ranging between 3 to 7 inches in length. You may notice a vole due to its short and stocky body and light brown to gray fur.

A vole has a long, pointed snout, small dark eyes, and small ears, a tail, and legs. While voles may look like small gophers, you will not find any exposed incisor teeth in these critters like you would in a gopher. 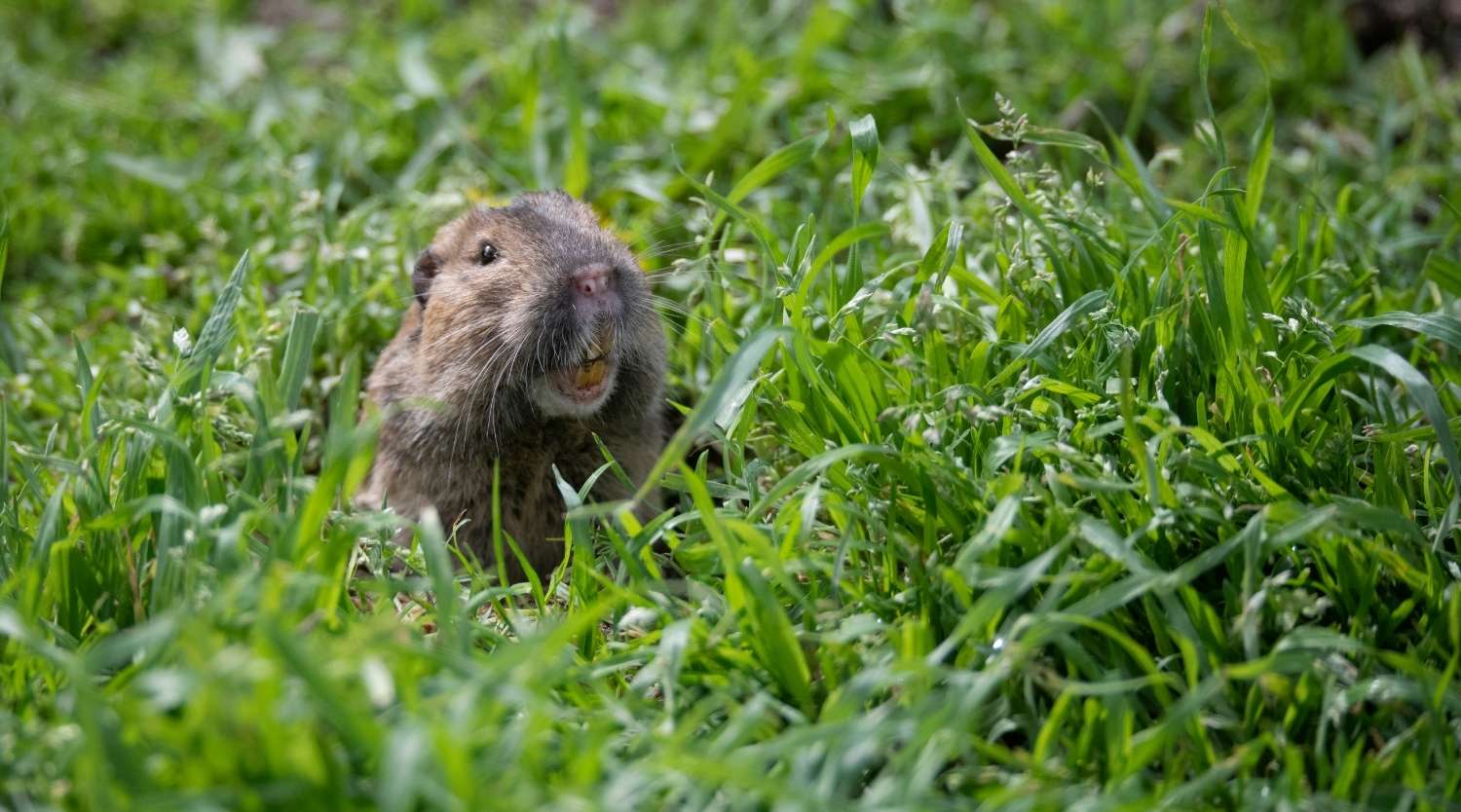 Gophers, also known as pocket gophers, are the largest of these pests at 6 to 12 inches long. There are over 25 species of gophers in North America. A gopher can be hard to spot initially since its fur can blend in with the color of the soil ranging from dark brown to black with a lighter hue on their stomach.

These small and hairy creatures have a white tail, four large exposed incisor teeth (two on the bottom and two on top),  whiskers, small eyes and ears, and a flat head. Gophers also have big white front paws and claws.

One of their most interesting characteristics is its large fur-lined cheek pouches outside of their mouths that they use to store food.

You can often tell the difference between moles, voles, and gophers by their behavior, such as where and how deep they burrow into your lawn. These furry critters dig holes and tunnels in the soil to store food, raise their young, and protect themselves against the harsh weather.

Gophers and moles are the most active in spring and summer and go deeper underground during the cooler months. All of these animals can cause damage to your lawn but there are signs to help you identify and remove them from your yard. 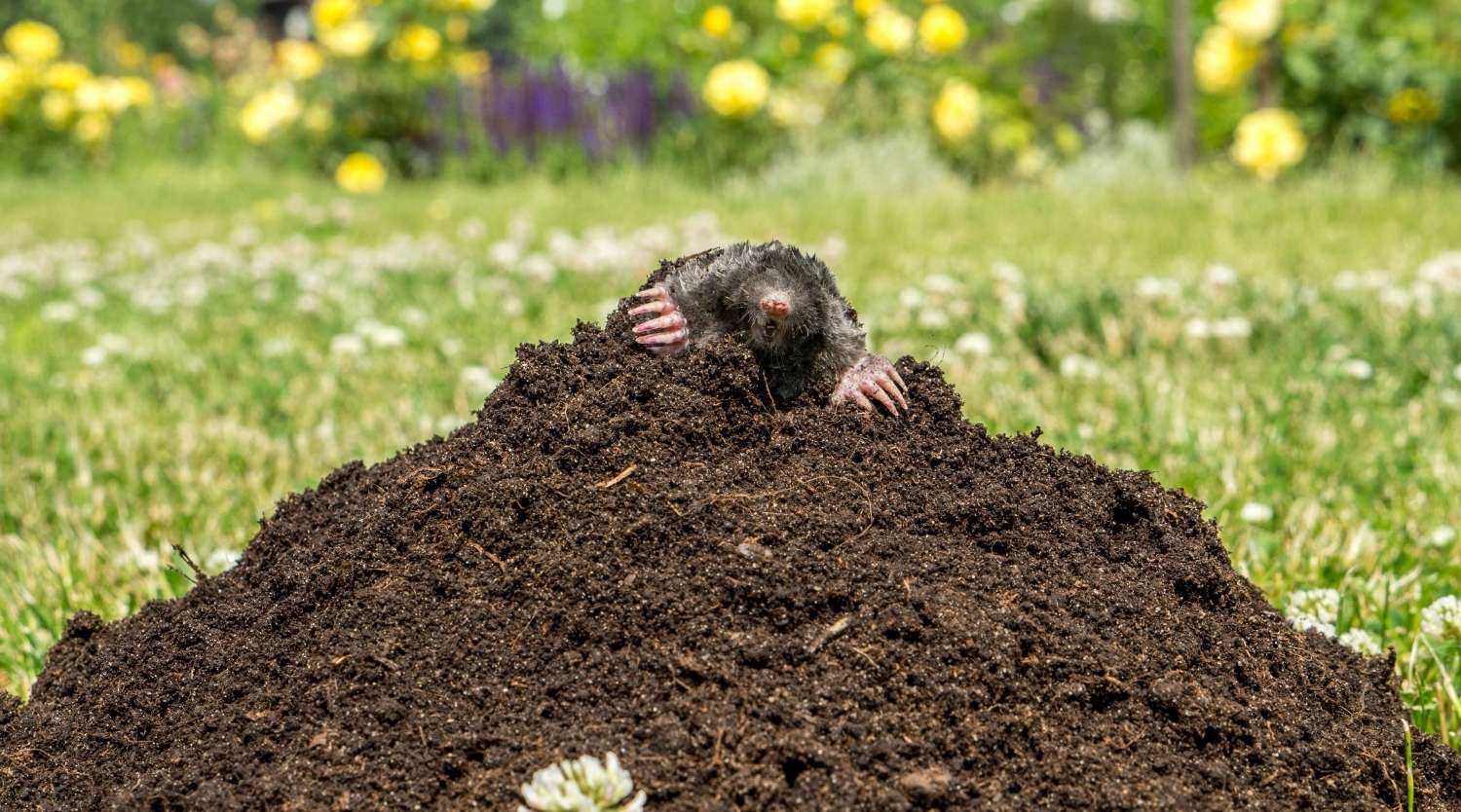 Moles are known for digging tunnels deep into the soil and searching for insects to eat. On your lawn, you may notice holes and round mounds of dirt on the exit and entry points. Mole mounds tend to be volcano or cone-shaped mounds.

Moles like to burrow in earth clods and coarse soil. They tend to dig new tunnels at night near the surface of the lawn resulting in a series of raised ridges spanning the length of your lawn in the morning. Mole burrows are slightly over 2 inches in diameter.

All the digging from the mole tunnels can disrupt plant roots and bulbs of plants causing them to shift in the soil and possibly die if they are heavily damaged. Since moles dig tunnels just underneath the ground’s surface, you may notice a softer ground that can even collapse under heavy pressure. In addition, these pests can break irrigation tubes and utility cables underground. 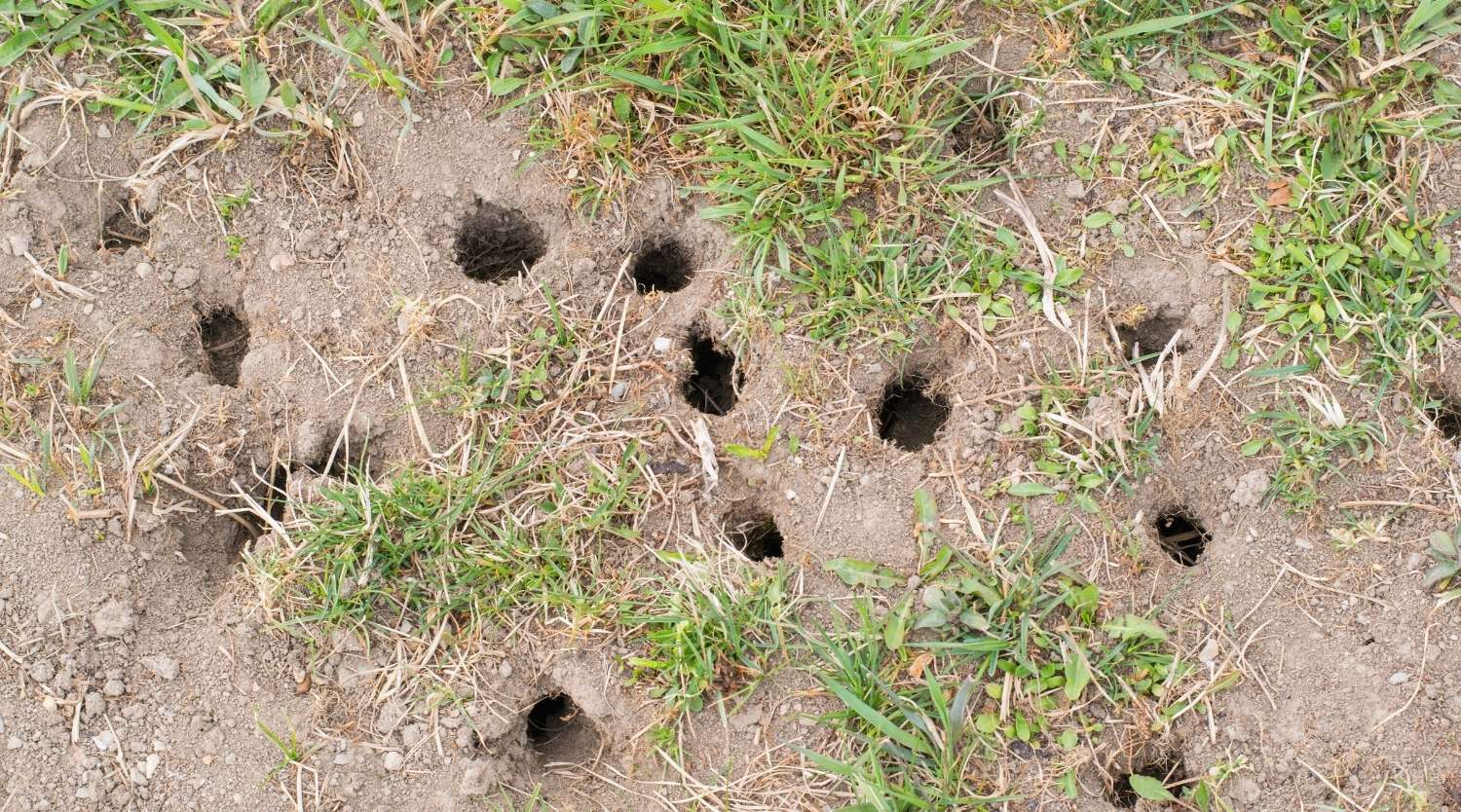 Voles are harder to spot since they tend to stay away from humans and rarely come above ground. Like moles, voles make shallow burrows on your lawn and create distinct, shallow runways a couple of inches wide on your lawn as they move from burrow to burrow.

Their holes can be about 1 to 2 inches in diameter. They may also use holes dug up by moles or other underground pests. Since they can use tunnels made by moles, the ground can feel spongy and soft when walking over it.

Underground dwellers such as the pine vole are known to make tunnels along structures such as house foundations, stone walls, ground covers, and perennials. Voles that forage above ground can create runways around the yard.

Voles are herbivores that like to feed on grasses and roots, which can cause your lawn to slowly die off. Without roots to provide your plants with moisture and nutrients, your lawn may begin to get weak and stop growing altogether.

When it is cooler outside, voles may chew on the bark of trees and plants. Generally, vole activity can be found under covered vegetation such as tree canopies and shrubs, making them harder to notice than other underground pests. 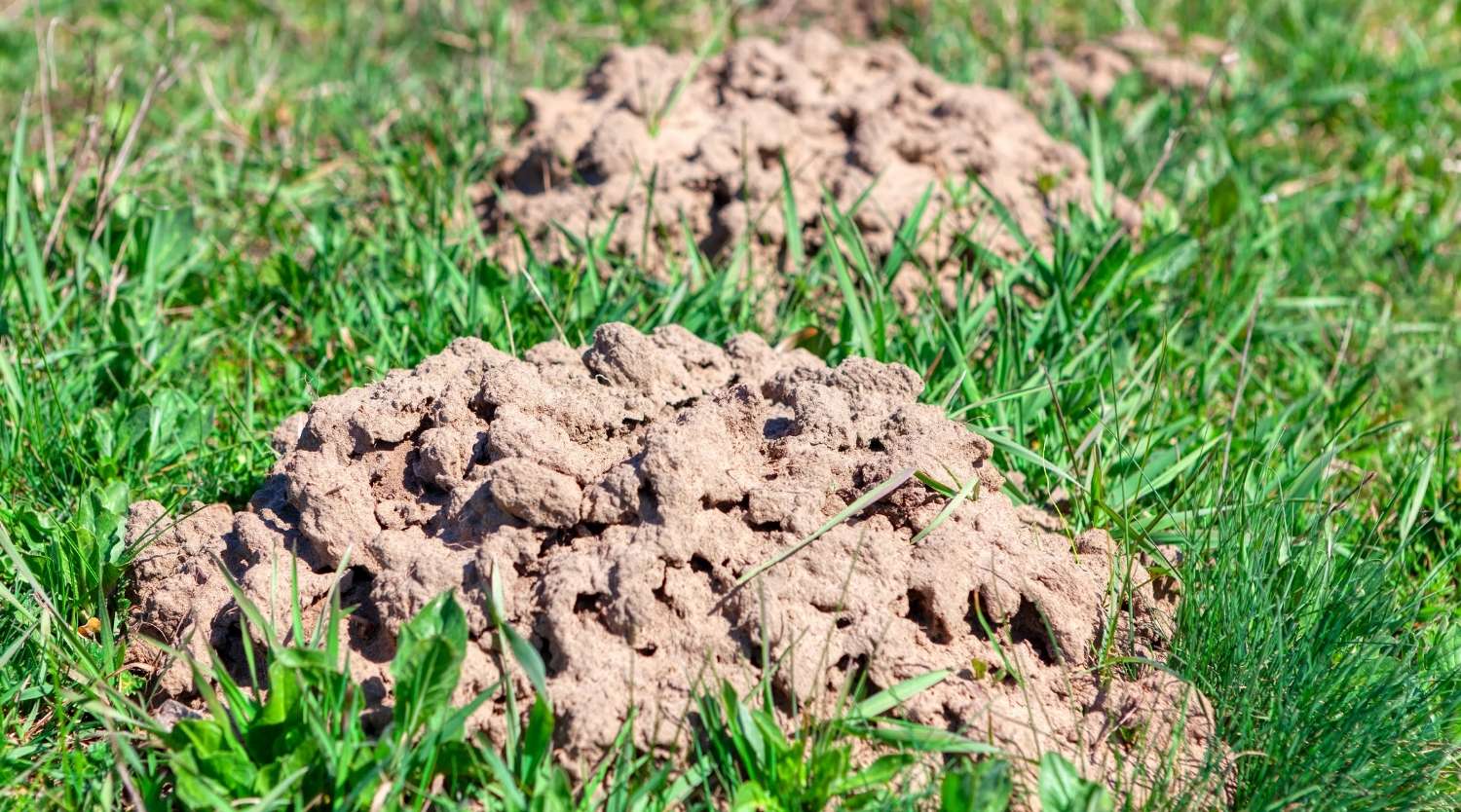 Gophers can create large mounds up to 2 feet tall. Their fan or kidney-shaped mounds include a low spot where animals dig the tunnels and a high crescent dirt mound where they toss the dirt. Their tunnels are typically 4 to 18 inches underground with lateral burrows connecting the network.

Gophers usually prefer to live in areas with firm soil over rocky or swampy regions. If their dirt mound has a pile of fresh dirt that is completely plugging the hole, it means the gopher is still digging but if the hole is exposed, the gopher activity has stopped.

Gophers are solitary creatures but a single gopher can ruin a yard. Just one pocket gopher can create hundreds of dirt mounds in a single year if left unchecked. If you see multiple holes in your lawn, it may be the work of a single gopher.

These underground dwellers tend to hide out below and sporadically appear above ground to forage for food from your lawn and garden. They eat plants, ornamentals, shrubs, and other attractive landscaping in your yard. They will also damage utility cables and irrigation tubes underground when digging their tunnels.

How to Get Rid of Moles, Voles, and Gophers

Getting rid of destructive wildlife such as gophers, moles, and voles requires identifying the active burrow sites in your yard and using the right pest control devices on the surface of your property.

Gophers can cause extensive damage to the lawn nearly destroying your landscaping with their burrow system which can exceed 2,000 sq feet. If you are seeing high mounds of dirt popping up around your lawn, it might be time to control these pocket gophers.

If you are unsure that a gopher is currently occupying the tunnel system, you can dig open the mound into the tunnel and wait a couple of days to see if that tunnel gets plugged again. If it does, there is still gopher activity.

Many homeowners have turned to pesticides as a form of baits for gophers and moles. Keep in mind, this method of gopher control can put other animals at risk. If you have dogs or cats around the house, they may ingest these toxic chemicals. Keep them away. In fact, all baits should be kept out of reach of children, pets, and non-target wildlife.

Some baits can also cause secondary poisoning: when an animal eats a rodent that has consumed the bait. This can do serious harm to the neighborhood pets and non-target wildlife, which are helping reduce the rodent population.

Additionally, there is a species of pocket gopher that is protected in some counties in Washington state. Lethal control is not allowed in regards to this specific breed, and you can’t trap and release them anywhere other than the property on which they were trapped.

Homeowners may also use live or snap gopher traps. However, you should ensure that pets and small children stay away from these traps. In addition, research your state regulations relating to “body-trapping” any small animal, including gophers. Some states, such as Washington, may have stricter rules and/or licensing than others on how you can remove wildlife from your property. 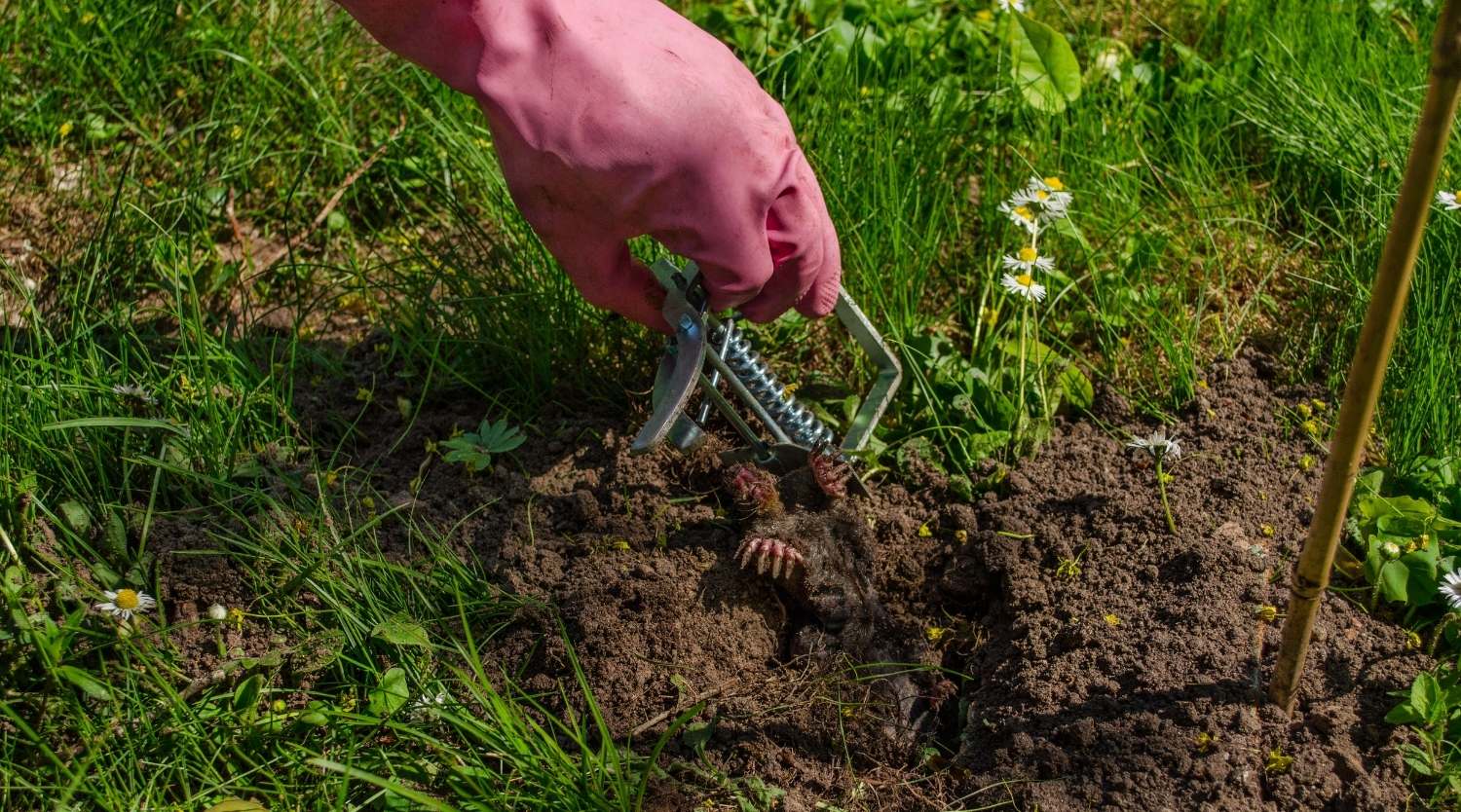 On the one hand, the mole’s carnivorous diet can remove insects such as earthworms and grubs that are damaging your plants. On the other hand, moles are more trouble than they are worth since they can cause extensive yard damage on your property.

Homeowners commonly use traps to catch moles. They can come in shaped, scented, and flavored options such as worm-shaped baits to attract moles. You may need to dig and cover the bait in active sites. However, you should always follow the manufacturer’s directions for placement and ensure that this method is legal in your state.

Homeowners also use pest repellents to get rid of their mole problem. Repellents are not as effective as traps, but can be a big help. Castor oil on your lawn can ward away moles and gophers. A common castor oil mix includes 6 oz of 100% unrefined castor oil, 2 tablespoons of liquid detergent, and 1 gallon of water. 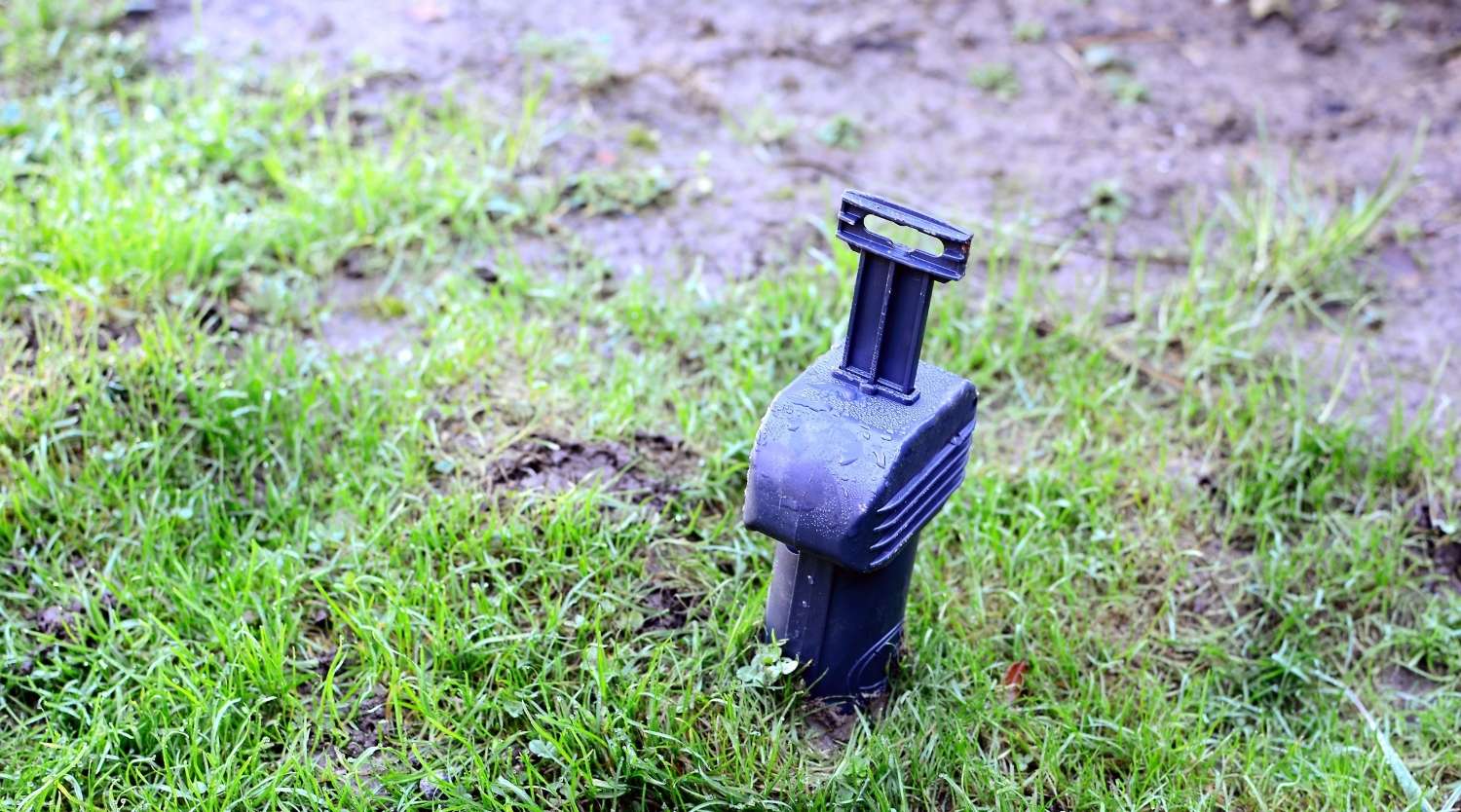 With voles, one of the best ways to keep them out of your property is through prevention and maintenance of your yard. Since they like to hang out near the surface under tall and dense vegetation, keeping your yard mowed and your greenery trimmed can help.

If you have got a vole infestation on your hands, we recommend using traps. Since they already produce visible runways on your lawn, you can strategically place the traps along these paths according to the manufacturer’s instructions to catch them while they move above ground.

Stop by Wilco farm stores to choose from a wide range of pest control options for gopher, mole, or vole infestations. We can help you regain control of your lawn and keep your garden free from pocket gophers, moles, and voles.